Shooting accused hauled out of court 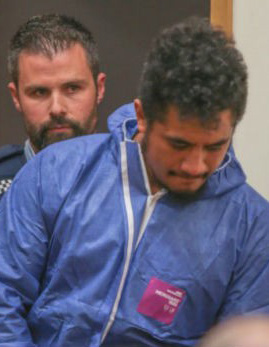 Shooting accused hauled out of court

A man facing four charges of shooting police during a 22 hour siege in the Bay of Plenty had to be hauled back to the cells by corrections staff and court security today.

Rhys Warren, who is in custody on remand, was appearing at a High Court call-over in Tauranga before Justice Toogood to set a trial date. The Justice appeared by audio video link.

Warren is facing four counts of using a firearm against police in Onepu near Kawerau on March 9. He pleaded not guilty to the charges during a court appearance on March 23.

Following the brief appearance, Warren refused to go back to the cells and was being escorted by corrections staff, who had already been reprimanded by the Justice for arriving half an hour late, when the volume of the shouting rose and court security ran across the court to assist.

When he arrived, Warren refused to enter the dock and was heard arguing with the corrections staff who refused his request to be seated in the courtroom with the lawyers.

Warren began reading a prepared statement to the court before he was aware the Justice was appearing by AVL.

“I represent myself and enter no plea,” says Warren.

He was launching into his second reading of the statement, saying the court has no jurisdiction when he was interrupted by Justice Toogood demanding to know why corrections were half an hour late delivering Warren to the Tauranga courthouse.

He then asked Warren if he had anything to say.

“Mr Warren if you do not speak now then I will simply speak to counsel,” when there was no reply.

The trial has been set down for March 6, 2017, in Hamilton. Warren is further remanded in custody for a trial call-over on October 12.

Amicus Curiae (Friend of the Court) Ron Mansfield says (also via AVL) that jurisdiction is going to be an issue and has already been raised.

The Justice says that will be dealt with on the papers.

“I'm not going to waste valuable Court time to deal with that kind of issue.” Says Justice Toogood.

Warren was arrested following a 22 hour armed siege in the Eastern Bay of Plenty in which four police officers were shot.

sunlive
[go to original article]
back to top