Kim Dotcom legal saga: Extradition to US over Megaupload still on cards but he claims court ruling is a 'major victory' 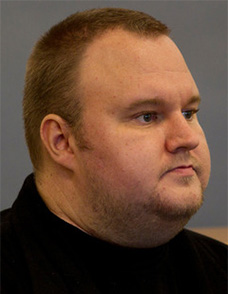 Kim Dotcom legal saga: Extradition to US over Megaupload still on cards but he claims court ruling is a 'major victory'

Kim Dotcom is still going to the United States, says the High Court, but in an exclusive interview the internet entrepreneur is claiming the latest ruling is a victory.

This latest legal milestone is this afternoon's ruling from Justice Murray Gilbert who had been asked to overturn a decision that Dotcom was eligible for extradition to face criminal charges in the United States.

After five months of deliberation, Gilbert found that Dotcom remained eligible for extradition to the US - but not on copyright charges.

The judge found in favour of arguments put by Dotcom's legal team, led by Ron Mansfield, that there was no equivalent "copyright" crime in New Zealand that would activate the extradition treaty.

However, the ruling also saw Justice Gilbert finding in favour of the US argument that Dotcom - and his three co-accused - could be extradited because it was at essence a "fraud" case and there was such a crime in the extradition treaty.

Dotcom, Mathias Ortmann, Bram van der Kolk and Finn Batato face decades in a US prison after a 2012 raid brought down the Megaupload file-sharing super-site Megaupload they set up and ran.

They have always maintained their innocence - even in the face of emails such as that sent by Ortmann which stated: "We're not pirates, we're just providing shipping services to pirates."

The evidence of the case has not been argued in New Zealand courts with the legal debate here being one of trying to match the crimes Dotcom and others are charged with to the crimes listed in the Extradition Act.

In an interview with the Herald, Dotcom said the ruling was a "major victory" because it ruled that there was no New Zealand equivalent to the US criminal charges of copyright violation.

"The major part of this litigation has been won by this judgment - that copyright is not extraditable.

"They destroyed my family, destroyed my business, spied on me and raided my home and they did all of this on a civil copyright case.

"We have won. We have won the major legal argument. This is the last five years of my life and it's an embarrassment for New Zealand."

He said it was effectively a statement from the court that neither he, his co-accused or Megaupload had broken any New Zealand laws.

"Now they're trying through the back door to say this was a fraud case. I'm confident going with this judgment to the Court of Appeal.

The ruling today has created an unusual bureaucratic contradiction - the warrant which was served on Dotcom when he was arrested on January 20, 2012, stated he was being charged with "copyright" offences.

Likewise, the charges Dotcom will face in the US are founded in an alleged act of criminal copyright violation.

Dotcom said there were plans to take a separate court action over the arrest warrant, given it showed he had been arrested for a crime which effectively did not exist in New Zealand.

Instead, it cited a section of the Copyright Act which dealt only with civil matters.

Dotcom said he got advice about the Copyright Act when he came to New Zealand which reflected the decision in today's judgment.

"It was clear there was a safe harbour (for internet service providers) and that there was no crime under New Zealand law."

He said the judgment meant there was "basically no copyright law in New Zealand".

Dotcom predicted that there would be two more years before the case had completed working through the courts.

"We'll be looking at a seven-year total timeframe before there is a final resolution on this matter. I am now more confident than ever that we will prevail."

"As we have said all along, there is no such offence under our Copyright Act. We were right.

"To win the major plank of the case but to get that outcome is extremely disappointing. It is hard to accept the logic that, if the conduct that all accept at its heart relates to assertions of breach of copyright ... how it can nonetheless be massaged into a general fraud offence."

Lawyers acting for the US began referring to the case as one of "fraud" after months of hearings.

By the time of the extradition hearing in late 2015, it was a main plank of the case with the lawyer acting for the US, Christine Gordon QC, telling Judge Nevin Dawson: "When distractions are stripped away, the evidence boils down to a central scheme of fraud. The scale of that fraud and the way it was conducted might indeed be novel. This is mainly as a result of the reach of the internet and the behaviour of mass audiences.

"Yet the dishonesty at the core of Megaupload's operation can be expressed in straight-forward terms. The basic features do not differ significantly from earlier cases of fraud against copyright owners.

"The respondents were part of a conspiracy. They deliberately attracted copyright infringing material to their website. They deliberately preserved it, deliberately took steps to profit from that material and made vast sums of money which they applied to various purposes knowing it had been unlawfully acquired."

Both sides are expected to challenge aspects of the ruling before the Court of Appeal - and eventually the Supreme Court, if it accepts the case.

If the Supreme Court upholds the decisions of the District and High Court, the Minister of Justice is then able to sign the extradition order - which itself can be challenged in the courts.

On that basis, there are at least two years of Dotcom hearings yet to run.

The ruling harks back to the first couple of years of the Dotcom case, which appeared to suggest the New Zealand Government had not focused closely enough on details when acting on the request for help from the FBI.

Among other difficulties, New Zealand managed to bungle the restraining order which saw Dotcom's goods seized, struggled with a search warrant that carried inaccurate information and illegally spied after misunderstanding the law for our electronic surveillance agency.

2005: Dotcom founds the file-sharing site Megaupload, which becomes one of the most popular sites on the internet.

November 2010: Dotcom, who was born in Germany and who also lived for several years in Hong Kong, is granted permanent residency in New Zealand.

January 2012: The U.S. shuts down the Megaupload site, files criminal charges against Dotcom and his colleagues, and seizes money and assets worth tens of millions of dollars. Dotcom is arrested in a dramatic police raid on his mansion in New Zealand and is incarcerated.

February 2012: Dotcom is released from jail on bail.

May 2014: The Internet Party, funded by Dotcom, is registered with election authorities.

December 2015: The New Zealand District Court finds Dotcom and three colleagues can be extradited to the U.S. They appeal the decision.

February 2017: The New Zealand High Court agrees with earlier decision that Kim Dotcom and three of his colleagues can be extradited to the U.S. to face criminal charges. Dotcom's lawyer says they'll appeal and take the case to New Zealand's Supreme Court if necessary.