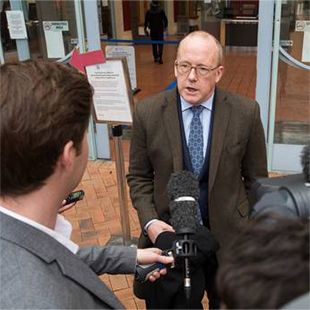 A high-profile lawyer has questioned a statutory order by the Chief Judge which is "undermining" the impact of ongoing Ministry of Justice industrial action.

In a letter to the country's lawyers dated Wednesday, Chief District Court Judge Jan-Marie Doogue said she was exercising her statutory powers under the District Court Act to "ensure the orderly and efficient conduct of the court's business".

"I write to inform you that the impact of escalating industrial action in the District Court has led me to make the following decisions...," she said.

"With effect from 19 November 2018 the sessions of the District Court shall be altered to align the morning, lunch and afternoon adjournments with those being taken by court staff."

He said the order made lawyers and the court "complicit with the ministry in relation to its ongoing dispute with the Public Service Association (PSA)".

"The PSA action is lawful industrial action, action which many consider more than justified. To require us to appear to side with the ministry is offensive to many," he said in a statement provided to the Herald.

Mansfield criticised the previous National-led Government which he said "neglected justice, and the courts including its staff".

"The current Government is now left with the responsibility of trying to properly fund the justice system. It at least should recognise that an effective and efficient modern justice system is essential to any modern day democracy," he said.

"The courts are the referee between the state and its people. It should steadfastly protect rights and freedoms - and not permit them to be eroded. It certainly should not give the appearance of siding with any one side."

Chief Judge Doogue used section 24, subsection 3, of the District Court Act, which allows her - among other powers - to determine the sessions of the court, determine the places and schedules of sessions for individual Judges, manage the workload of individual judges and make directions, and set standards for best practice and procedure in the court.

"It is no longer orderly or efficient to roster or schedule judges beyond the existing rosters, and cases that cannot be allocated an event or a hearing will be recorded on a ready list for scheduling at a later date," she wrote in her letter.

"I appreciate the impact this may have on your members, but I trust I can rely on their cooperation and goodwill to help keep the wheels of justice turning for people who need access to justice and who rely on the District Court."

Mansfield said, as a defence lawyer, he is routinely in the position of seeking to protect an individual's rights.

"I consider it is not appropriate that we be ordered to comply with the courts orders with respect to break times, which are solely designed to undermine the impact of the industrial action," he said.

He said pressure would be better placed on the ministry to engage meaningfully with the PSA.

Chief Judge Doogue was asked for comment on Mansfield's statements, however, a spokesperson simply referred the Herald to the letter and a previous statement.

On Thursday, the New Zealand Law Society claimed a brawl at the Christchurch District Court was a direct result of the ongoing employment dispute.

The incident occurred when men rushed the dock as a man appeared in court over the fatal shooting of a King Cobra gang member.

"From being disruptive of court hearings, this situation has now shown that the safety of people attending the court is at increased risk," New Zealand Law Society president Kathryn Beck said following the clash.

However, PSA national organiser Brendon Lane told the Herald previous appearances for the case had been held in closed courts because of the security threat King Cobra members posed.

Thursday's hearing was directed by the judge to be held in open court, the union representative said.

Mansfield also "strongly disagreed" the PSA strikes had any involvement in the Christchurch brawl.

"I consider that is disingenuous to impose any blame on the PSA, security incidents like that happen sadly regularly and hence the difficult and stressful environment court staff work in every day," he told the Herald.

The incident came after the Employment Court at Auckland dismissed an injunction application by the Ministry of Justice to stop short-notice "lightning strikes" by PSA members because of safety concerns.

This week, staff at New Zealand's biggest and busiest district courts also said they would refuse to serve, check and sign legal documents for nearly a month, creating a logjam of adjourned cases.

Staff at Manukau District Court also cancelled sentencing matters this week, resulting in as many as 72 cases being adjourned.