Dotcom given go ahead to livestream appeal 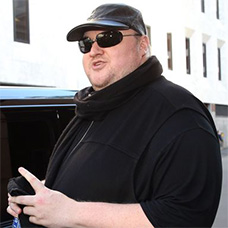 Dotcom given go ahead to livestream appeal

Kim Dotcom has been given permission to livestream his appeal against extradition on Youtube.

The US wants to extradite Mr Dotcom and three other men - Bram Van der Kolk, Matthias Ortmann and Finn Batato - to face criminal charges of money-laundering and copyright breaches related to the defunct file-sharing website Megaupload.

A district court ruled last December that the men were eligible for extradition.

Prior to the appeal starting, Mr Dotcom's lawyer Ron Mansfield made an application to livestream the entire proceeding, under the in-court media guidelines.

"This is a case of the internet age and as such has attracted significant academic and media interest," Mr Mansfield said.

The issues being discussed could set both national and international legal precedents, he said.

"However ... the chances of such interest being satisfied by the necessarily brief footage by television or radio is negligible."

The Crown opposed the application on behalf of the US.

A livestream could pollute a potential jury pool in the United States if the men ended up standing trial there, Crown lawyer Christine Gordon said.

"There will be extensive submissions made in this court about matters that may well be inadmissible and irrelevant in any future trial," she said.

"If those are reported or livestreamed in the way proposed, there's a very real potential for a prejudicial effect."

However, Justice Murray Gilbert granted the application, subject to agreement from Mr Dotcom and the other men that the case would only be livestreamed and any footage would be removed as soon as the six-week hearing was over.

The footage would also be streamed with a 20 minute delay, to allow the court to prevent any suppressed material from being published.

Crown lawyers have argued on behalf of the US that Megaupload was a "simple scheme of fraud" that wilfully breached copyright on a huge scale by hosting illegally-created movie, music and software files. The site aided and abetted users who uploaded popular illegal files by paying them financial rewards, the US said.

Mr Dotcom's lawyers argued Megaupload was set up as a legitimate file-storing site, and there were a large number of people who were using it for that purpose. They said their client could not be held responsible for the illegal actions of some users.